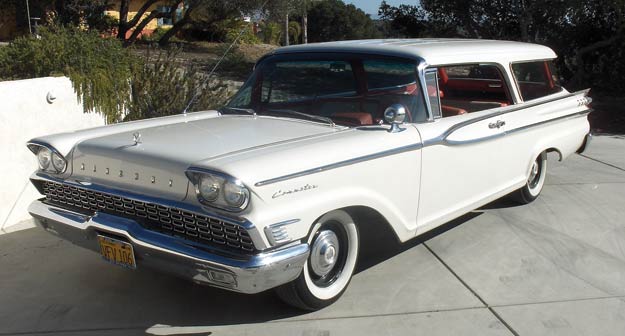 My neighbor Marie was the original owner of my wagon. Marie was a school teacher working in the China Lake, CA, area. Her parents lived two doors down from my house. They wanted her to have a heavy car for safety when she traveled home. Well, then she moved back to San Jose and the car was too big for her in town. She told me that one day she drove the car into her garage and said that she would “never drive that car again.” I believe that that was in 1969.

Over the last 20 years, I had seen the car now and then when the garage door was open. Marie had supposedly sold it twice to two different neighbors, but never finalized the deals. When I would ask her about the car, she would never give me an answer.

One day I went over to see her. She invited me in and told me she was trying to save some money in order to go to Europe on vacation. I immediately said, “Marie, why don’t you sell me your Mercury? I made her an offer. She looked at me and said, “That would be fine.” My heart skipped a beat and I went home.

After about two months, on July 22, 1995, I finally got the car home -no pink slip, no registration, one set of keys, and a bill of sale. I finally got it registered and running.  The car was stored for twenty-six years and had 34,346 miles on it.  It has a 383 2V engine, automatic dual range transmission, PS, PB, factory A/C, clock, power rear window, Town & Country radio, remote outside rear view mirror, day/night interior mirror, six passenger, cigar lighter, rear cargo light. There were only 1,051 manufactured. It was built in Los Angeles at Plant #2 on January 20, 1959.

(Sal is a member of Nor-Cal Galaxies/Mercurys)