Text and photography by Charlie Morris

Sometime prior to the first week of December, 1968, representatives of the famous Ford performance dealership “Hayward Motors” in Hayward, California, prepared an order for a “local promotion” vehicle under DSO item #8991. This placed into motion a series of events that resulted in the production of a 1969 Ranchero 428 Cobra Jet– a car destined to become coveted by collectors nearly 46 years hence. 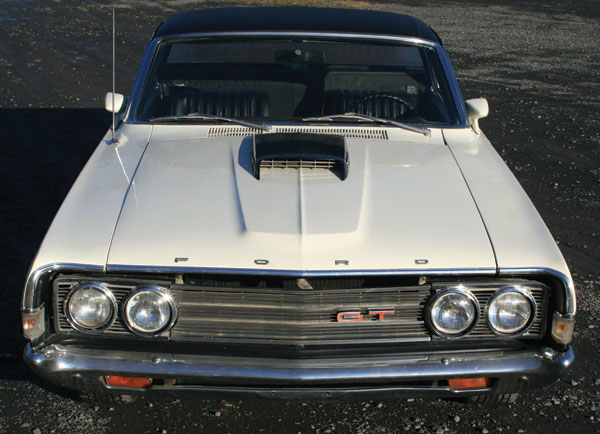 The Hayward Ford order was received at the Kansas City Assembly Plant on December 3, 1968, and on January 6, 1969, our feature car/truck rolled down the assembly line joining a long line of Ford vehicles that wore the Ranchero badge.

Introduced in 1957, the first generation Ranchero rode on the full-sized Fairlane chassis and offered the comfort and amenities of a passenger car combined with the bed of a pickup truck. And while not marketed as a performance vehicle, the ’57 Ranchero was available with the same engines as Ford’s car line, up to and including the 300 horsepower supercharged 312 cubic-inch Y-Block V8. The Ranchero continued as part of Ford’s radically restyled 1958 lineup by combining the new front sheetmetal with the 1957 rear cargo box, and featured the newly-introduced 352 cubic-inch FE series V8 as the top engine option. For 1959, Ranchero received a total makeover front to rear, identical to the passenger cars, and again the 352 was the optional V8.

Ranchero in the ’60s

Ford’s approach changed dramatically for 1960 as the Ranchero joined the newly introduced Falcon line of compact economy cars and picked up the title; America’s lowest priced pickup. With a base price under $2,000 and a 90 horsepower, 170 cubic- inch inline six as the only engine offering, the Falcon Ranchero was hardly sporty. But it did brag of a payload capacity greater than Chevrolet’s El Camino, a similar vehicle based on the full-sized Chevrolet of the time. Throughout the front half of the ‘60s, Ranchero would continue as part of the Falcon line, gaining small-block V8 power along the way. In 1966, the Ranchero became somewhat of a hybrid, using a Falcon front clip and the new for ’66 Fairlane’s hind quarters. In 1967, the Ranchero joined the mid-sized ranks of the Fairlane, and the accompanying wider engine bay provided ample space for the 390 cubic-inch FE series engine. For 1968, the Fairlane line was supplemented by the even larger Torino and the Ranchero grew in size while engine and transmission options remained similar to the 1967 model.

All this would change for the 1969 model year however, as Ford now packed the 428 Cobra Jet. This was arguably the best street performance engine ever to roll out of Dearborn, and it was available on the Ranchero option list. Enter our feature car, a sporty Wimbledon White Ranchero GT featuring black vinyl top and GT stripes. The interior sports optional Courtesy Lights, AM/FM Radio, Deluxe Steering Wheel with Rim-Blow horn and an instrument panel mounted tachometer. All very nice, but it’s the functional hood scoop feeding fresh air through a 735 cfm Holley four barrel carburetor to that big, thumping 428 Cobra Jet torque monster residing below that really matters. That tells where the sharp points on the horns of the bulls head emblems affixed to our Ranchero’s B-pillars come from. Vastly underrated at 335 horsepower, the big FE is backed up by a hefty close ratio T&C Toploader 4-speed transmission, while a 3.50 geared Traction-Lok differential assures that any heavy dose of throttle will shred both rear F70x14 Polyglas tires equally.

Our feature car is also fitted with optional power steering and power assisted front disc brakes to help the nose heavy Ranchero negotiate curves and bleed off the high terminal velocities produced by the Cobra Jet engine under the hood.

On February 6, 1969, J.S. Brackett of Felton, California, took delivery of this particular vehicle, which would be one of just 80 Rancheros built with the 428 and 4-speed in 1969. The car thankfully survived the years remarkably well to become a welcome addition to the collection of Paul Christophersen of Nebraska. 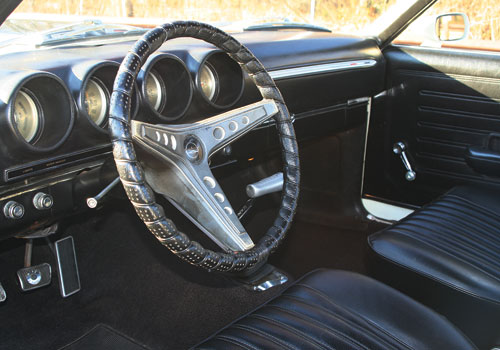 The padded dash has four distinct pods which include; speedometer, gauges, and optional tachometer. Clock could be fitted in place of the tach and from a hot rodder’s view point, would have made more sense. Factory tachs were notoriously inaccurate and hard to read. Serious performance buffs mounted after market tachometers. Hurst shifter with T-handle was standard equipment with 4-speed option. Deluxe steering wheel now has an after market cover over the unique Rim-Blow horn feature that is highly sought after in cars from the era. Dash also houses a factory AM/FM radio. Brake pedal trim announces that this Ranchero is equipped with optional power assisted front disc brakes, a handy option on a vehicle powered by the Cobra Jet engine.

Hefty bucket seats are clad in black vinyl, comfortable but with little lateral support. Door panel badge announces that this is the Grand Touring model (Ranchero GT) and compared to the pickup trucks of its day, the Ranchero would tour in greater comfort, carry cargo and handle far better. 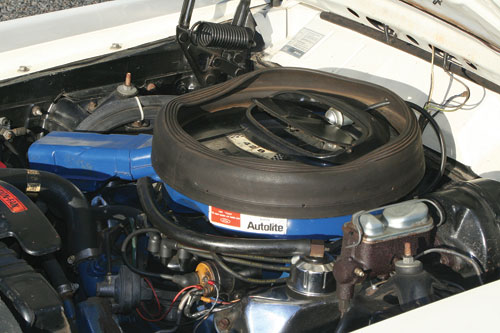 The 428 Cobra Jet engine receives horsepower-producing outside air via a vacuum operated flap on the top of the air cleaner, which is sealed against the bottom of the hood via a heavy rubber gasket. This system feeds air to a 735 cfm Holley four barrel carburetor mounted atop an 80 plus pound cast iron intake manifold that was a copy of Ford’s Police Interceptor aluminum intake. A very tractable hydraulic lifter camshaft (.481/.490 lift with 270/290 degrees of duration) identical to that used in the earlier 390GT engine, fed the mixture through 2.09” intake valves into cast combustion chambers where cast aluminum pistons squeezed it to a ratio of 10.5 to 1. Burnt gasses were expelled via 1.66” exhaust valves through Cobra Jet specific free flowing cast iron exhaust manifolds. With a 4.13” bore diameter and 3.98” stroke, the 428 made gobs of torque (440 ft.lbs. at 3,400 rpm) while the almost laughable factory horsepower rating of 335 came at 5,200 rpm. The National Hot Rod Association “factored” the CJ’s output to 360 after Ford’s entries annihilated the competition at the 1968 Winter Nationals in Pomona, CA.

The huge FE fills the Ranchero’s engine compartment shock tower to shock tower. Changing spark plugs is a challenge. The installation of aftermarket exhaust headers can be a most daunting task. Such an undertaking was worth the effort however, as the increased breathing benefited the 428’s performance greatly while the removal of the factory cast iron manifolds got unwanted weight off the front of an already nose heavy vehicle. Our feature car remains factory stock which adds to its value in today’s market. 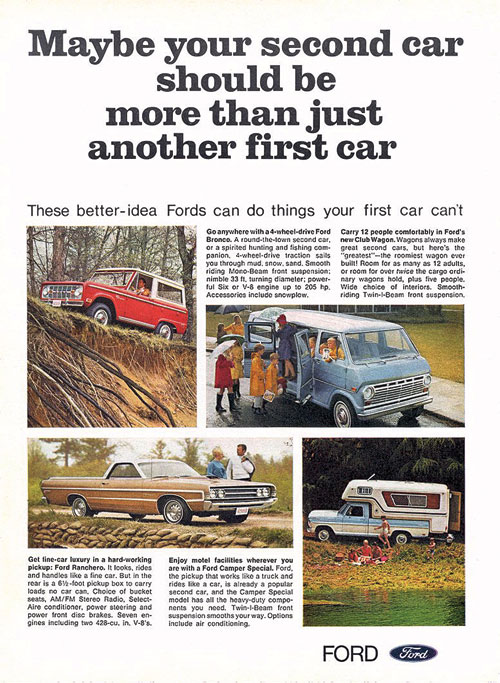