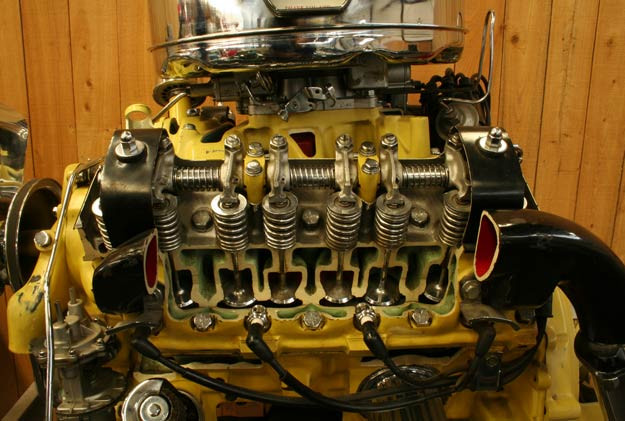 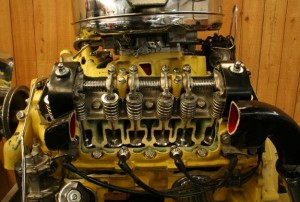 Looking at these pictures of the cutaway display of the Y-Block Ford engine, some of the attributes that make this particular engine family unique are prominently displayed. These include the over and under stacked intake ports, shaft mounted rocker arms, fully counter-weighted crankshafts, and priority main bearing oiling. By knowing just a little about the manufacturing variances that occurred during the years this engine was in production (1954-1964), it becomes evident that the displayed engine is not a specific engine that’s been cut apart, but an assorted collection of Y parts from different years in which to make the display possible. Here’s how I came to that conclusion…

The displayed intake manifold along with the Ford four-barrel carburetor sitting on its top first saw duty in 1957 on the ‘D’ code 312 engines. Four-barrel intakes prior to this used the Holley 4000 series of carbs (more reverently known as Tea-pot carbs) or an earlier Carter design, both of which had a smaller mounting pad. The Ford carburetor is potentially correct as the 312 could have received either the Ford, Carter, or Holley carb on the pictured intake.

The first clue that this engine is a collection of parts rather than being a specific example are the rocker arms, as they are the screw and jam nut design, which were only used through the 1955 model year and were the 1.43:1 ratio. Starting in 1956, the rocker arms went to a screw that used a friction fit on the threads to hold the adjustment rather than a jam nut, while also having a ratio increase to 1.54:1. But before you think that this would be an easy way to tell the rocker arm ratios apart, starting in 1958, the rocker ratio went back to 1.43:1 but retained the friction fit adjustment screws.

Looking at the back of the engine, there is the ’57 and up distributor. Prior to 1957, the Ford Y used a distributor that was referred to as the Load-O-Matic, which was smaller in diameter while also using a different design vacuum advance chamber. The earlier Load-O-Matic distributors were not very hot rod friendly and resulted in poor performance when carburetion changes were made without upgrading the ignition system accordingly.

Another anomaly are the freeze plugs that are evident in the ends of the cylinder heads. This is a design feature that was phased out during the 1956 model year. The spark plugs appear to be the larger 18mm tapered seat plugs which rules out this particular set of heads as being from 1954, which used a 14mm sparkplug.

A spin-on oil filter is being used which was also introduced in 1957. Prior years used a cartridge filter but many of these were easily upgraded to the spin-on type.

Not shown in the pictures is the externally mounted oil pump which could be another clue if trying to identify the engine by year model. Prior to 1957, a spur gear design oil pump was used exclusively on the Y, but in 1957, beginning with use on the 312 engines, the gerotor design made its debut. By the end of the Y-Block’s production run in 1964, all Y-Blocks were using the gerotor style of oil pump.

There are no block casting numbers evident and the piston itself does not give a clue to the actual cubic-inch of the engine in question, so it could be a 239, 256, 272, 292, or 312 at this point. The yellow color is also not a clue as this was not a factory color. Regardless of the size or year of the display engine in question, it does still show the major attributes of what make a Y engine distinctive and in a class of its own.