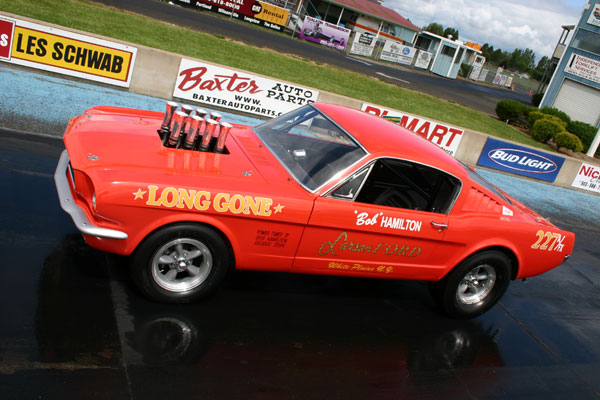 “It was 1965 in New York, and it was the worst winter storm that we had ever seen”, remembers Bob Hamilton. They took their Ford Flatbed down to Larson Ford, to pickup up their Poppy Red 1965 K code Mustang Fastback. They loaded up the car off the showroom floor, and barreled through the blistering winter storm to Holman Moody to have the car prepped for A/FX (Factory Experimental Class) Super Stock drag racing. 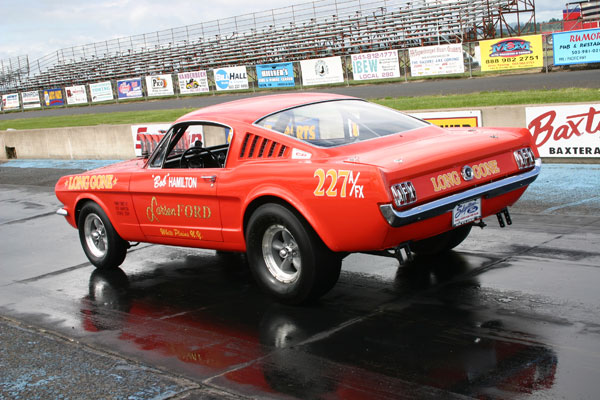 This little Mustang started off life as a 289 High Performance K Code, which all A/FX Mustangs started as. Even Shelby American got into the act building a couple of race-prepped GT 350 drag Mustangs. If you thought the 1964 Thunderbolt was a rare commodity, with only a 100 built, think about this: only around 13 ‘65 Mustang Fastbacks were delivered to Holman Moody to undergo this major transformation, and they were probably the greatest altered Ford Drag cars in history. Only 5 of these cars are known to exist today. 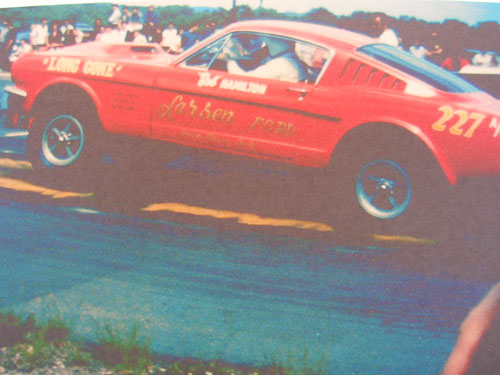 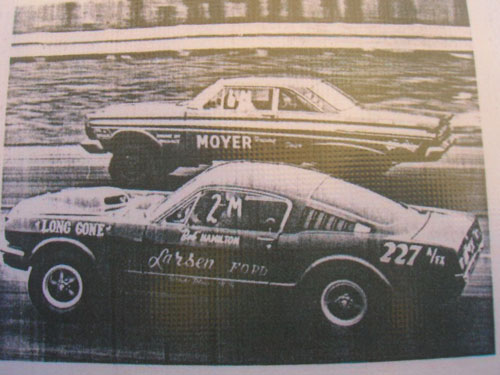 Bob Hamilton started drag racing in 1944 with a 1936 Chevrolet coupe, running a 302 GMC Truck engine. Back in those days, the Ford Flathead V8 was the king. But Bob’s inline 6 dominated the tracks in the Cleveland, Ohio area. He drag raced through the years, but it was not until around 1964 the he really got serious about racing. In 1964, he bought a ‘64 Ford Galaxie 500/XL with a 427 8V / 4-speed combo. He bought the car for his wife (we have all heard that story before). After a few months, the car was turned into full-time race car in the New Jersey/New York area. The whole family was involved – his wife Dorothy, his son Bob Jr. and his two daughters (Bonnie and Peggy) were virtually the entire pit crew. Bob and his son tuned the car to catch lower ET’s. The car was named “The Tortoise”; running 12s with 7” slicks, at around 125 mph. 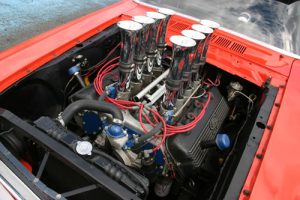 In 1965, Bob decided that he would enter into another area which would prove to be some of the best times of his drag racing life. He campaigned this Mustang through Larson Ford of White Plains, NY. Hamilton’s success in drag racing, and Larson Ford’s involvement in high performance sales gave them the edge to compete in the A/FX class. This Mustang was raced in that class for the 1965 season, with great success.

In the spring of 1965, Holman Moody “Long Gone” got its long awaited 427 SOHC. The “Cammer” equipped A/FX Mustangs ran in the 10s, and many times were running in the high 9s. During the summer of ‘65, Hillborn Injection was installed with huge velocity stacks, which the car runs with today. Rules changed for the 1966 season, and all the cars were returned to Holman Moody to move the rear end back to the factory specs. The rear trailing arms were removed and new quarter panels were replaced. “Long Gone” never made its way back to Holman Moody for the alterations, so today it is the only A/FX Mustang that still retains all of its original alterations.

During the ’66 racing season, Hamilton and “Long Gone” traveled the East Coast, running in headliner match races and exhibitions – and proved to be the highlight of the drags. Bob stopped racing the car when he came off the line too hard, lost control of the car and ended up behind the grandstands. Thankfully no one was hurt, and the car was not damaged. This information came from one of Bob Jr’s friends who witnessed everything that night. The car was put in Larson Ford’s showroom, and was sold through their High Performance center after the end of the ‘66 drag racing season. As for Bob, he didn’t give up drag racing. He decided to drive a some tamer cars, one of which you might have seen at Barrett Jackson at the Scottsdale 2007 auction – a 1970 Chevelle LS6 called “Red Alert”.

“Long Gone” was bought by a gentleman named John Skistimas, and he raced it in 1967 as the “Jersey Rattler” running the same configuration. And why not? It was a turn-key tried and proven race car. It was painted dark blue with white lettering on the fender that read “It’s A F-O-O-O-O-R-D”. On the door it said “Jersey Rattler”. “Long Gone” was still running the 427 injected SOHC and was running in C/A (Competition Racers Association).

Around 1969, the car was painted gold with blue on the sides. It was raced for short time. 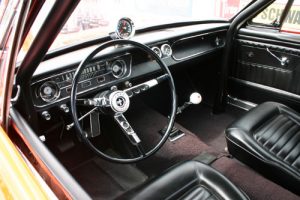 In the late ‘80s, “Long Gone” was pulled out of storage and went through a full restoration by Randy Delisio of “Super Stang”. Randy is one the leading authorities of A/FX Ford drag cars when it comes to restorations. The car was very complete, which was vitally important since it was the only one left equipped with the original Holman Moody modifications. “Long Gone” still has its original VIN intact and never got into any major accidents, which makes this car A/FX a true time capsule!

Today the car is owned by Jim Donofrio of Salem, Oregon. On occasion, one might be able to catch a glimpse of “Long Gone” sitting in the showroom of Jim’s Skyline Ford dealership. But its true place is at Jim’s home, amongst a collection of other high performance Fords. The historic Mustang sits between a 1970 Boss 429 and a 1966 AC Cobra. Late at night, Jim sometimes goes out to his garage (more like a showroom), and what does he fire up? You guessed it – “Long Gone”. You can hear that injected SOHC rumbling through the Willamette Valley floor here in Oregon.

Woodburn Dragstrip (Woodburn, OR) was nice enough to let us bring the car out to the track to do the photo shoot. Jim has spent a lot of time behind the wheel of his circle track car through the years, and on the drag strip when he was a little younger. When he was doing a burnout for this session at Woodburn, the back tires started to grab, and the car starting lurching forward. Jim couldn’t help himself, it was like some kind of flashback. Before you know it, “Long Gone” and Jim were blistering down the ¼ mile. It was a sight to see, we felt like we were back in 1965 all over again, there are many photos and videos of the car back in the day doing the same thing. The owner of Woodburn Dragstrip, Jim Livingston, was not to happy though; he was a little steamed, and respectably so. The track was not set up for racing that particular day. But in the end everything was fine, after we apologized a 100 times. We felt like little kids in a candy store, grinning from ear to ear. Especially Jim (Donofrio), for this was the first time he had ever had “Long Gone” on the track, and truly experienced what it felt like to own an altered wheel A/FX Mustang. One thing he can’t imagine though, is driving on the original M-H Polyester Drag Slicks with magnesium wheels, pushing the car to its limits like Bob Hamilton did back in 1965.